The objectives of this lab are to use digital logic to design a combinational logic circuit for an alarm system and to build and test the system using prototyping components.

Digital logic is the conceptual language behind modern computer systems. It uses the Boolean language, which consists of a system of rules that essentially says “yes” or “no” to a series of questions. Although this could lead to extremely complicated decisions, the fundamentals of digital logic will be explored in this lab by designing a digital logic system to address a simple problem statement.

A K-map is a two-dimensional representation of the truth table that shows the common characteristics of the inputs. For an equation with three inputs, usually all the combinations of the first two inputs are shown as four columns and the values for the third input are shown as two rows. For four inputs, all the combinations of the third and fourth inputs are shown as four rows. Only one value can change at a time in adjacent rows or columns. For example, in Table 2, the columns change from 00 to 01 to 11 to 10. Table 2 illustrates the K-map for the ATM example.

Table 2: K-Map for the ATM Example

To develop the simplified Boolean equation, look for the cells that have the 1 value in common. Look for cells that can physically be boxed together, where the number of cells in the box is a power of 2 (1, 2, 4, or 8 and so on). The boxes are allowed to overlap so the same cells can be used more than once. Look for the biggest boxes first, and keep finding smaller boxes until all the cells with a 1 in them are used. This means that sometimes just single cells will remain at the end. The cells in the K-map for the ATM example can be grouped like what is shown in Table 3.

In this example, all the cells containing a 1 were covered with two boxes. This means that if the conditions for either box are true, the output will be true. This also means that the simplified Boolean equation will only have two terms. The term for each box can be determined by observing which variables are constant throughout each cell of that box. For the red box, only W remains constant through the four cells. D switches from the top row to the bottom row, and P switches from the left column to the right column. For the blue box, P and

remains constant through the two cells, while W switches from the left cell to the right cell. The two boxes yield the simplified Boolean equation shown in Equation 2.

Boolean logic is applied to digital circuitry through the use of simple logic gates. There are symbols for each of these gates, and the connections between them are represented by lines running from the output of one gate to the input of another. A line can connect only one output to each input. There are seven gates: the NOT, AND, OR, NAND, NOR, XOR, and XNOR gates. Only the first three will be used in this lab (Figure 1).

The NOT gate is the simplest of the three. It is an inverter. It has one input and produces its opposite as the output. For example, if a 1 is the input to a NOT gate, a 0 value is outputted, as seen in Table 4. The symbol for the operation is a horizontal bar over the variable. The truth table for a NOT gate is shown in Table 4.

Table 4: Truth Table for a NOT Gate

The AND gate performs a multiplication operation on its inputs. If all the inputs are true, the output is also true. But if either of the inputs is false, the output is also false. An AND gate can have two or more inputs, but for this lab, it will have two inputs (denoted by A and B in Table 5). The symbol for the AND operation is a dot (·) or the two inputs one after the other with nothing between them. The truth table for an AND gate is shown in Table 5.

Table 5: Truth Table for an AND Gate

An OR gate performs an addition operation on its inputs. If either of the inputs is true, the output is also true. But if all the inputs are false, the output is also false. An OR gate can have two or more inputs, but for this lab, it will have two inputs (denoted by A and B in Table 6). The symbol for the OR operation is a plus (+). The truth table for an OR gate is shown in Table 6.

Table 6: Truth Table for an OR Gate

Lastly, a combinational logic circuit can be created using the simplified equation. First, a NOT operation is performed on D by inputting and outputting inverted D through a NOT gate. Then, the P and inverted D are inputted into an AND gate, as denoted by them being multiplied in Equation 2. Finally, the result of the AND operation between the P and inverted D and the W is inputted into an OR gate, as denoted by the addition function in Equation 2. The final combinational logic circuit can be seen in Figure 2. 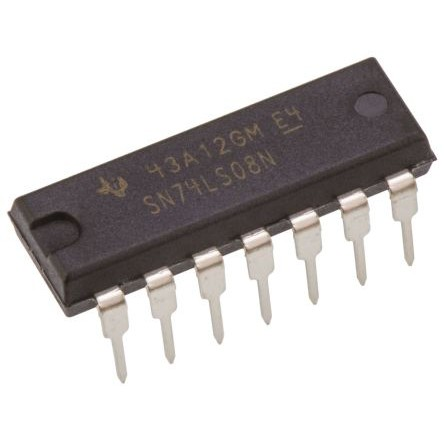 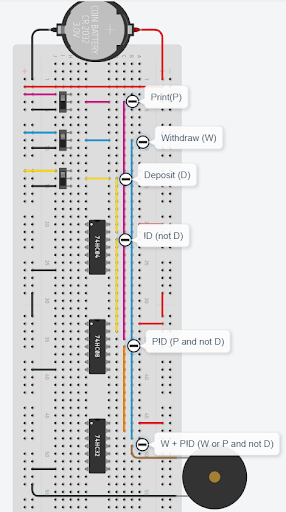 output. This output is wired to an AND gate input (Chip 7408), along with a 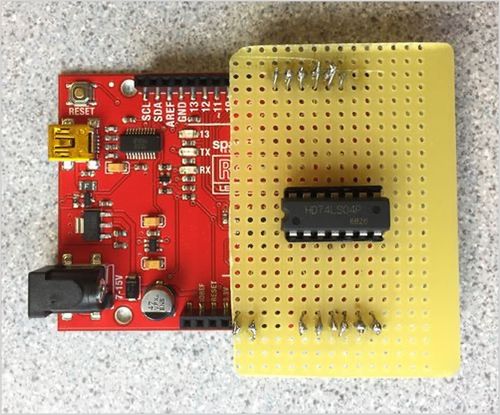