The objective of this experiment is to use biomedical forensic techniques, including extracting DNA, fingerprinting, identifying foreign substances, and performing blood typing to investigate a crime scene. The DNA will be extracted using the basic biochemical techniques for isolating, purifying, and digesting DNA molecules. The drug testing will be completed by observing chemical reactions using simulated reagents. A blood typing simulation kit will be used to test the blood.

Most people learn about biomedical forensics from TV shows that, in fact, misrepresent this branch of science. It is true that biomedical forensic methods are commonly used in criminal or civil cases, but some of these techniques also have applications in medicine in the diagnosis and treatment of diseases and injuries, in product safety and analyzing how and why products and systems affect users, and other engineering fields. In criminal law, these techniques are used to identify suspects in criminal cases and to exclude individuals as suspects. DNA testing, in particular, is increasingly used to prove the innocence of people who have been wrongfully convicted of a crime.

The Structure of DNA

Deoxyribonucleic acid (DNA) is found in almost all living organisms. These organisms can be as simple as single-celled bacteria or as complex as a multi-celled human; the human body contains approximately 50 trillion cells. There are two different types of cells: prokaryotes and eukaryotes. Prokaryotic cells do not have a nuclear membrane and so do not have a distinct nucleus. An example of prokaryotic organisms are bacteria. Only eukaryotic cells, which are found in plants and animals, will be considered in this lab. Eukaryotic cells have a distinct, membrane-bound nucleus that isolates the DNA from the rest of the cell. Plant cells are different from animal cells in structure and cellular contents. Only plant cells will be used in this experiment.

Plant cells are surrounded by a cell wall that has high mechanical strength and protects the cell. The cell wall lies directly beneath the plasma membrane (Figure 1) that separates the interior of the cell from the outside environment. Cytosol is found within the plasma membrane.

The various cell organelles that perform specialized functions for the cell, including the nucleus, are found within the cytosol. The nucleus (Figure 2) houses DNA in the form of chromatin, which is the building block for chromosomes. 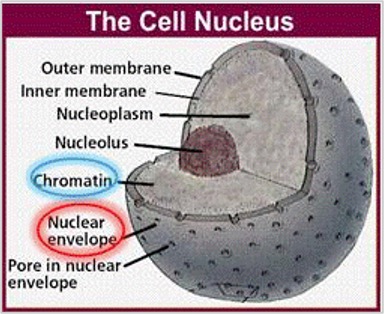 Chromatin is the active form of DNA in the cell when it is not preparing for cell division. It is comprised of DNA wrapped around protein particles called histones, which help pack and order the DNA into structural units (Figure 3).

The DNA molecule is a double-helical polymer consisting of a sugar-phosphate backbone with nitrogenous bases running perpendicular to the backbone. These bases, often represented by letters A (adenine), G (guanine), C (cytosine), and T (thymine), are the elementary components making up coded genetic information (Figure 4). The base sequence acts as the instruction manual for the cell directing it on how to make proteins and other important molecules that an organism needs to survive and function. 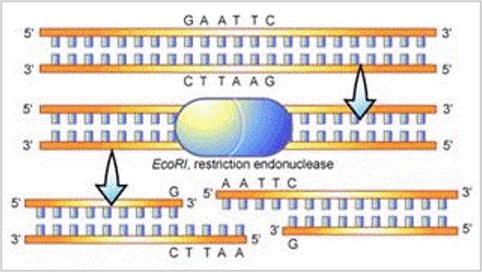 A process that will be used in this experiment is to extract the DNA from a fruit sample. Some knowledge of DNA extraction is needed to do this. The DNA extraction process is a fairly simple biochemical procedure that can be divided into three major steps: breaking open the cell wall, destroying membranes within the cell, and precipitating the DNA out of the solution.

The first step in DNA extraction is to break the cell wall (cell lysis) to expose the DNA within the cell. Plant cells have a very rigid external structure — the cell wall — that protects the intracellular components. It is very rigid and acts as a protector and filter for substances moving in and out of the cell. It is made of cellulose, which is the insoluble substance that makes wood hard and durable. To destroy the cell wall, a mechanical method is used to break apart the cellulose molecules. In this experiment, the fruit sample will be mashed manually.

The second step in DNA extraction is to destroy the plasma membrane within the cell. The cell's plasma membrane is made of phospholipid bilayers that are made of fat. To disrupt them, the mesh of fat molecules is broken up with a surfactant (soap). The structure of soap is very similar to the structure of fat and grease and lowers the surface tension between two fluids when acting as a surfactant.

A soap molecule has two parts: a head and a tail. The head is polar and is attracted to water (hydrophilic) while the tail is non-polar and attracted to oil and fat (hydrophobic). When soap molecules are in water, they group themselves into micelles that have a roughly spherical structure in which all the polar heads point outwards (toward water) and all the non-polar tails point inwards at the center of the sphere (away from the water) (Figure 5). 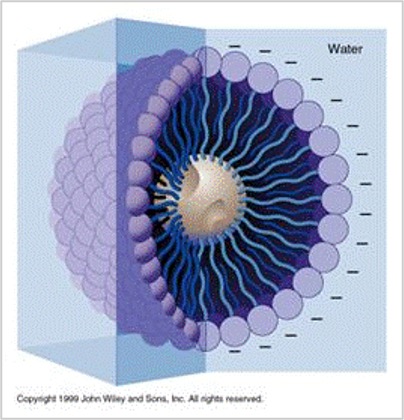 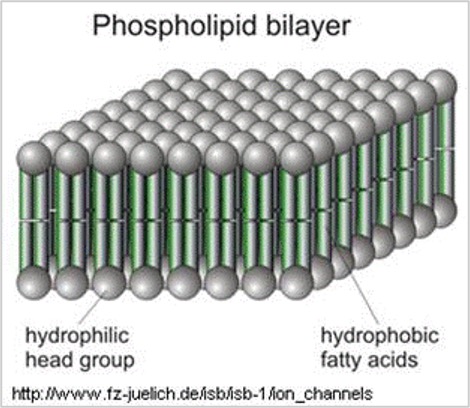 The last step in DNA extraction is precipitating the DNA. When the plasma membrane is successfully disrupted, the DNA is released from the cells into the solution along with protein molecules and other cellular miscellany (Figure 6). With the cell's contents mixed into a solution, the DNA can be separated from the rest of the contents. This process is called precipitation. Salt is used because it disrupts the structure of the proteins and carbohydrates found in the solution. Also, the salt provides a favorable environment to extract the DNA by contributing positively-charged sodium ions that neutralize the negative charge of DNA.

After the addition of salt and soap, the extracted DNA cannot be seen as it is too small to distinguish from the rest of the solution. To aid in making the DNA visible, alcohol is added since it cannot dissolve the DNA. A translucent white substance will begin to form at the top: this is the DNA (Figure 7). Once the precipitate is thick enough, it can be spooled out. This simple procedure is a rough extraction process that needs further purification before it can be successfully run on a gel for analysis. 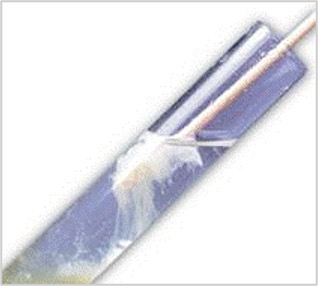 The fingerprint pattern, such as the print left when an inked finger is pressed onto paper, is made from the friction ridges on that finger. Friction ridge patterns are grouped into three distinct types — loops, whorls, and arches — each with unique variations depending on the shape and relationship of the ridges. 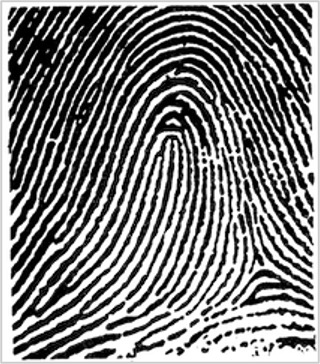 Whorls form circular or spiral patterns, like tiny whirlpools (Figure 9). There are four groups of whorls: plain (concentric circles), central pocket loop (a loop with a whorl at the end), double loop (two loops that create an S-like pattern), and accidental loop (irregularly shaped). Whorls make up about 35% of pattern types. 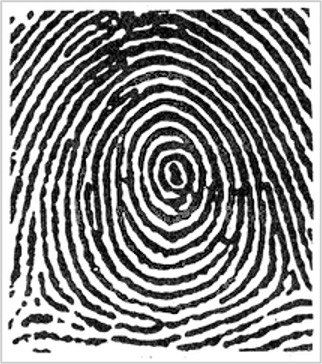 Arches create a wave-like pattern and include plain arches and tented arches (Figure 10). Tented arches rise to a sharper point than plain arches. Arches make up about 5% of all pattern types. 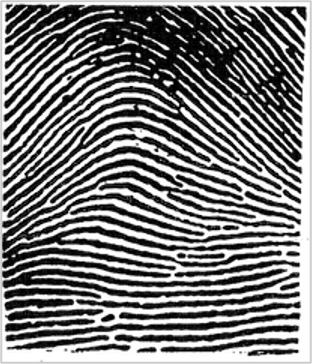 Even though all red blood cells are made of similar elements, not all blood cells are alike. There are eight different types of blood, each based on the presence or absence of three types of antigens (A, B, and Rh) (Figure 11). Antigens in general induce an immune response to foreign substances in the body. The A and B antigens determine the type of blood while the Rh antigen determines if the blood is positive or negative with the Rhesus factor, which is associated with hemolytic diseases and incompatible blood transfusions. 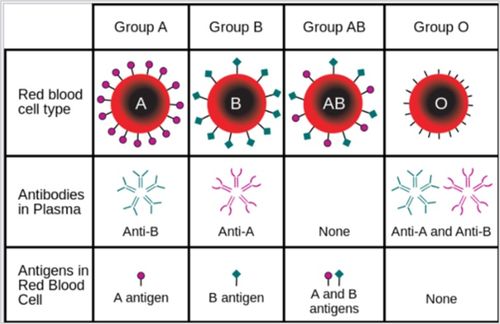 Basic training in three forensic techniques will be completed before the crime scene investigation is conducted.

Fingerprinting will be performed by using at-home materials.

Drug testing will be performed with a virtual simulation.

Congratulations, the Forensic Academy is now completed and the crime scene investigation can begin.

It was a warm and stormy night on July 23, 2017. The EG1003 office was quiet as one TA was pulling a late night shift to prepare the classroom for the next morning’s lab. There was a loud crash in the background. The room went dark. The next morning, there was police tape barring entry to the entire room. Someone had murdered Ruhit Roy, and now his killer must be found. At the crime scene, police discovered a pool of blood, along with the suspected murder weapon — a shard of glass — near the body. They have narrowed down the suspects to the 10 people who had access to the office that late at night.

Download the Suspect Information Sheet to get started on the investigation.

To collect important information on the murder, the victim’s blood will be tested to determine the drug that killed him.

The procedure below was previously performed and videoed by TAs. Watch this video for this portion of the Crime Scene Investigation. Download the video if it does not play in the browser. The steps are outlined for your information only.

Determine who the killer is using all the information gathered in the above three analyses and the data provided in the Suspect Information Sheet. Tell a TA who you think the killer is before leaving the lab.

Laboratory 3: Amplification of Your Mitochondrial DNA by PCR. (n.d.). Retrieved July 29, 2020, from http://hhmi.princeton.edu/lab-protocols/past-protocols/25-laboratory-3-amplification-of-your-mitochondrial-dna-by-pcr