Technical professionals frequently have to include mathematical equations in their PowerPoint presentations. Unfortunately, in many cases the results are not very professional looking, with everything being different sizes and misaligned. In an effort to improve things, some presenters take screen shots of equations that do look good, and then paste it onto their slide, making a grainy image of what used to be a good looking equation with a background that doesn't match the rest of the slide. We can do better.

First, we'll review how to put an equation on a PowerPoint slide. First, bring up the slide that you want to have the equation and click on the text area to highlight it. Next, look at the menu at the top of the PowerPoint window and you'll find an item called "Insert". Click it and a dropdown menu will appear. Click on "Object" and a popup window will appear. If you don't see the "Object" item right away, keep the mouse on the menu and it will expand so that you can see the item. After the popup window appears, make sure the "New Item" radio button has been selected (it usually is by default), and in the middle of the window you'll see a lengthy list of things you can include, in alphabetical order. Scroll down until you see "Microsoft Equation 3.0" and double click it. Another popup window will appear that will contain the equation you make.

Note: PowerPoint 2007 lost some significant functionality compared to PowerPoint 2003. Specifically, if you want equation text other than black, you will not be able to do it in PowerPoint. To do this, create the equation in Word, including all the formatting you want. Then triple click the equation. Then right click and select Copy in the menu that pops up. Then switch to PowerPoint. On the Home tab on the ribbon, click on the arrow below the Paste icon. On the menu that pops up, select Paste Special. On the menu that pops up, select Picture (Enhanced Metafile) and click OK. If this choice is not available, click Cancel, go back to Word, and try again. When you're successful, the equation will appear in your slide, and you can move it to where you want it. We know this is an ugly workaround, but we have yet to find a better way. Hopefully, Microsoft will fix this problem in the near future, and we'll update this page.

First, we'll review how to put an equation on a PowerPoint slide. First, bring up the slide that you want to have the equation and click on the text area to highlight it. Next, click the Insert tab on the ribbon. Click on the Object icon in the Text group, which will bring up a popup window. After the popup window appears, make sure the "Create New" radio button has been selected (it usually is by default), and in the middle of the window you'll see a lengthy list of things you can include, in alphabetical order. Scroll down until you see "Microsoft Equation 3.0" and double click it. Another popup window will appear that will contain the equation you make.

Entering and editing the equation

At the top of the window there should be a toolbar of mathematical symbols you can use, as shown in Figure 1.

If you don't see the toolbar, you can make it visible by going to the menu at the top and clicking "View", and then clicking on "Toolbar" in the menu. This will put a check next to the item which will make the toolbar appear at the top of the window.

As an example, we'll make a variation of the equation that you made in Lab 1. In this case, we'll have the phrase "root=" and then the quadratic equation. Note the box in the Equation Editor window, and the flashing cursor. Like Word, this is where anything you type will appear.

In the text that follows, when we say to type something followed by text in quotes, you should omit the quotes. Start by typing "root=". Note that the text is relatively large script italics. Next, we want the fraction. Since you've already done this in Lab 1, we'll summarize the instructions:

Some new boxes appear, and the cursor is where the exponential goes. Type the number "2" and you have the proper power. Now press the cursor down key, or click on the main box, and the cursor will move down to where you type what will be squared. Type "b". We can now finish up what goes inside the square root by typing "-4ac". Next, we'll do the bottom of the fraction. Click on the empty box at the bottom of the fraction and type "2a". You've now completed the formula.

The formula is mathematically correct, but it doesn't look very pretty. What you have should look like Figure 3.

There are multiple type sizes and styles. Also, sometimes you might see strange spacing in words. The problem is that as you type the equation, Microsoft Equation compares what you type with a list of known equations that it recognizes. It then "helps" you by separating the equation name from what comes next, which it views as a variable name. The results are frequently wrong. For example, if we use the word "Pride", Microsoft Equation will recognize this as a function called "Pr" for assigning probabilities) followed by a variable name "ide", and will produce the result "Pride". We need to fix these kinds of problems along with the rest.

We'll now clean everything up so that the result looks professional. First, let's see why things look different. Click on the word "root". Then go up to the menu at the top of the window and click "Style". Note that it there is a check next to the word "Math". Click on the "Size" item on the menu and you'll see a check mark next to the word "Full". Now click on the "b" that's part of the b2 inside the square root. Once again, click on the "Style" item in the menu and you'll see that "Math" is checked, but when you click on "Size" you'll see that "Symbol" is checked instead of "Full". This is why this is a different size. We'll now make this the same size as everything else so that it looks better. Double click the "b" that's the wrong size so that it's highlighted. Now go up to the "Size" menu item and click on the word "Full". The check mark moves from "Symbol" to "Full", and the "b" becomes the same size as everything else, making things look much better. The result is shown in Figure 4.

You can now use this technique any time you enter an equation to make it look good.

Figure 5: The equation in "Text" style

If you want, you can try other styles, or define your own. However, the "Math" style, once you fix the size issues, usually looks very good.

Putting the result on your PowerPoint slide

Now that you have an equation that looks good, you can now easily put it on the PowerPoint slide. Just close the Equation Editor by clicking on "File" and "Exit and Return to Presentation", or just clicking on the "X" on the window in the top right corner, like any other window. You'll now return to your presentation with the equation on the slide, but probably not where you want it. Figure 6 shows a typical slide. 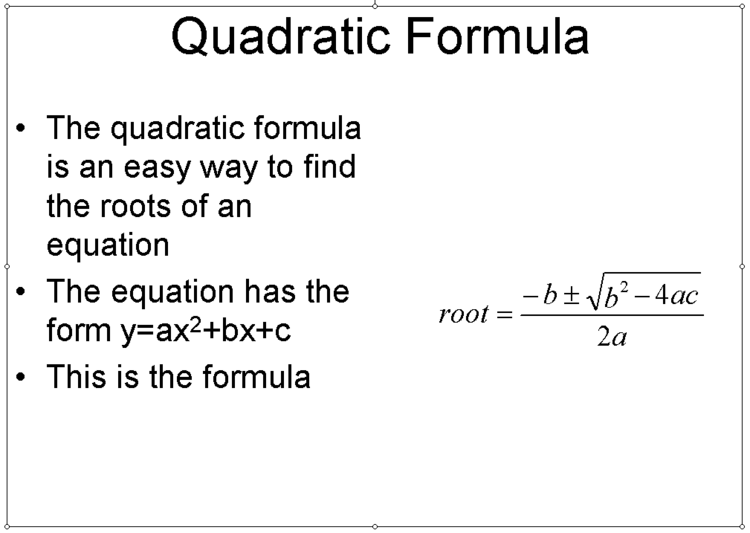 Figure 6: Typical slide with formula in the wrong place

We'll now move the formula to the right place, and also resize it. The equation works just like any other image, so if you know how to work with images on slides you can skip the rest of this.

Final Processing of the Equation 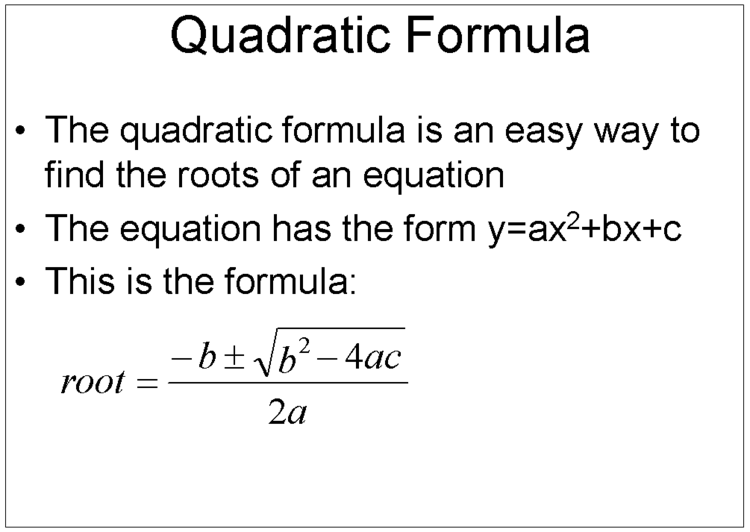 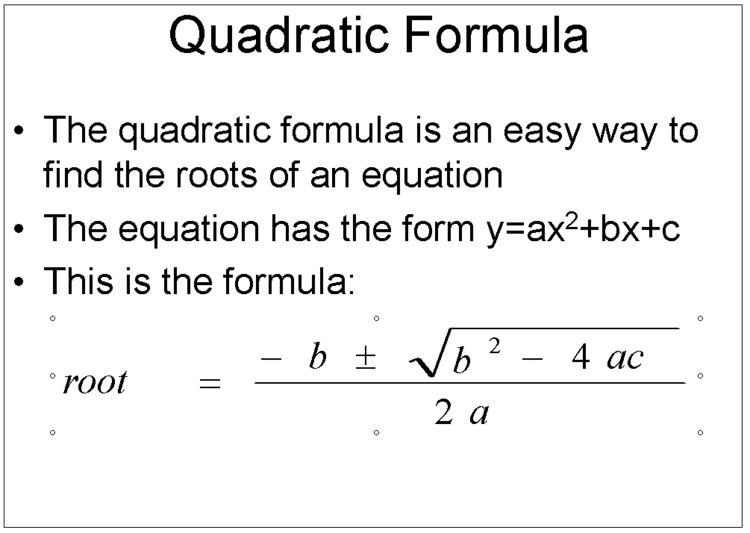 Getting the Colors Right

When you make an equation, the characters will be black. This is probably acceptable for a Word document, but can be disastrous in PowerPoint, especially if a dark background is chosen for your slides. In this case you have two options:

This section will describe how to pursue the second option.

First, all the work you've done so far is fine. All we need to do is some "post processing" to the equation to get it right. After you've gotten the equation on the slide in the right place, we'll change the color of the characters. To understand how this works, you need to know that PowerPoint considers the equation to be a special form of picture, so that's how we'll proceed.

Once the equation is selected, move the mouse over the equation and right click the mouse. This will bring up a popup menu. About halfway down the menu you'll see an item "Show Picture Toolbar". Click this item. A small toolbar will appear over the slide containing a number of icons. At the right end of the toolbar you'll see an icon of a can of paint being poured over a picture. If you "hover" the mouse over this icon, you'll see a "popup tip" with the caption "Recolor Picture". Click on this icon.

A popup window will occur with a title of "Recolor Picture", with your equation being shown (probably in black) on the right side of the window. On the left side of the window you'll see several lines of color bars, with each line containing a column called "Original" and "New". What these bars do is allow you to map the "Original" color into the "New" color of your choice. To the right of the "New" color is a pulldown arrow. Click on this arrow and a popup selection of colors will appear. If you like one of the colors shown, click on it. This will cause the "New" color in the bar to change to your selection, and a checkmark to appear in the box at the left end of this line to indicate that the original color is being changed. If you find the election of colors to be too limiting, when the popup selection appears, click on "More Colors..." and you'll see all the colors PowerPoint can make, arranged like an artist's palette. In the bottom right corner of this window is a box of the color you selected. Click the dot of the color you want. The box in the lower right corner will now show the old color and the new color. If you don't like your choice, keep clicking dots until you see one your like, or click "Cancel" to give up. If you find a color you like, click "OK" and you'll return to the "Recolor Picture" window. The right side of the window will now show the equation in the color you chose. If you don't like the result, just repeat this process. If you do, click "OK", and you'll return back to your slide with the equation in the color you like.

This functionality is not available in PowerPoint 2007. The workaround to this lack is to create and properly format the equation in Word 2007, and then copy and "Paste Special" into PowerPoint 2007, as described at the start of this page.

You now know how you can make good looking slides with good looking equations in them. This will give you a competitive edge against others who don't know how to do this. You'll find that the same techniques can be used for many other types of objects, such as Excel spreadsheets, video files, and many others. If you want to review the full range of what you can include, go to back to the PowerPoint menu and select "Insert" and "Object" again. This time scroll through the list of types and you'll see a rich selection. All of them work the same way, as we described here.