Capacitors have many uses in circuits and signal processing. In this lab, a capacitor can be used as the power source for the renewable energy vehicle. Fundamentally, a capacitor is an electrical device that is used to store charge temporarily. Some capacitors can be used in place of a battery, but they operate very differently from a battery. A capacitor is charged by a voltage source logarithmically, as shown in Figure 1.

Renewable energy is a type of energy that can be harnessed from naturally replenished resources. Some examples of this include sunlight, wind, and water. There are many benefits of using renewable energy such as clean energy sources, and they come from an abundant source that doesn’t become depleted. If we are able to efficiently utilize these renewable resources we can solve the problems with using non-renewable energy sources such as fossil fuels. [1]

Sunlight, like any other type of electromagnetic radiation, contains energy. Typically when the sunlight hits an object, the energy that it contains is converted into heat. However, certain materials can convert the energy into an electrical current, and we can harness it in this form and store it as energy.

Older solar panels consist of large crystalline structures made from silicon. When sunlight hits the silicon on the solar panel, the photons from the sunlight energize the electrons in the material. These energized electrons create a higher electrical potential in the material, which is measured as a voltage between that material and ground.

Wind turbines are used to capture the wind’s energy and convert it into electrical energy. The structure of a wind turbine has a heavy influence on its functionality. The blades on wind turbines are slanted so that as the wind passes over the blades it creates an uneven pressure on each side causing them to spin. The spinning blades, in turn, drive a low speed shaft connected to a gearbox. The gearbox within the wind turbine converts the low speed rotation to a high speed rotation through a high speed shaft. The high speed shaft is connected to a brake and then into an electrical generator where mechanical energy is converted to electrical energy. [3] 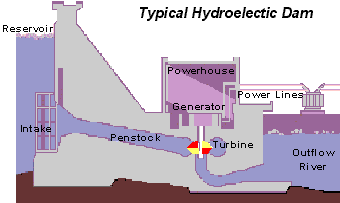 A diode is a device that allows current to pass through it in only one direction. This means that it has polarity, and will only allow current to pass from its positive side to its negative side. A Light Emitting Diode (LED) not only passes current but also lights up when it's passing current. LEDs have a forward voltage and a reverse voltage. In the forward direction, the forward voltage and resistance are low and determined by the material used in the LED. The reverse voltage has a much higher resistance and a higher reverse voltage that prevents the flow of electrical current. The characteristic of the diode is to have low resistance to electrical flow in the forward direction and high residence in the reverse direction provides the ability to control the flow of electricity in one direction only.

Every group will be designated to test the power storage device and a single power source.

Before entering the competition, test if both your motor and cable are working, and that the motors turn in the desired direction of travel.

The renewable energy vehicle must be able to carry the power storage device you choose to use on it (e.g. capacitor). You may only power your capacitor using the power sources provided. Violations to these rules will result in a failing grade for the lab report for this lab.