Difference between revisions of "Prototyping with Microcontrollers and Sensors"

Overview of the RedBoard 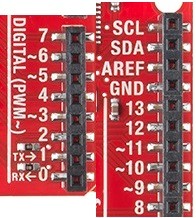