This writeup is intended for use with the EV3. For the NXT version, see Sensors.

The experimental objective of this lab is to design various Mindstorms programs that use rotation, light, touch, and ultrasonic sensors.

These exercises will build a foundation of experience with sensors programming that can be used with the semester-long design project.

Before we can learn to use sensors, we must become familiar with the EV3. Remember that the Mindstorms program is a compiler: a program used to make other programs. Just as a compiler is used when creating and debugging a C++ program, Mindstorms similarly compiles programs for the EV3. The Mindstorms interface is graphic; a text compiler like those used for C++ is not. However, the principle is very much the same. Actions are taken based upon circumstances set by the programmer.

For this portion of the lab, you will learn how to use the rotation sensor in the motor to determine the distanced your robot moved.

With the program now completed, upload it to your EV3 and run the program. Turn the motor that is connected to port A and look at the display. You should see numbers on the display that correspond to the number of times you've turned the motor.

Suppose you wrote a program that had your robot's motors move forward for 3 seconds.

Let's say you want to add the code that we previously made so that you can read the number of rotations that your robot made while it's moving. In order to do that, you'll need to create a new sequence beam.

For this portion of the lab, you will learn how to use the ultrasonic sensor in order to determine the distance between the robot and an object.

Now suppose we wanted to add an additional case to the program where the EV3 would display a caution sign when the Ultrasonic Sensor senses a distance less than 40 in but greater than 30 in, and display a sad face when the distance sensed is less than 30. In this situation, one switch case won't be enough, as the program will only check to see if the value obtained is greater than or less than one specific number. To overcome this problem, we'll need an additional switch case inside of the switch case we already have. 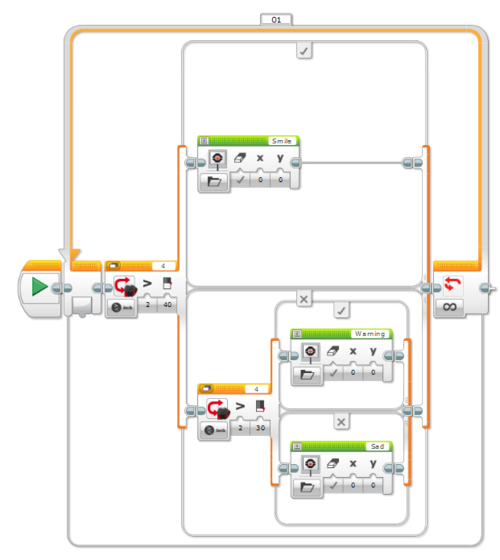 The program for obtaining the light intensity and displaying it on the EV3's screen is the same as that of the rotation sensor and the ultrasonic sensor, except you need to use the light sensor block.

The code for following a line using one light sensor is shown below. 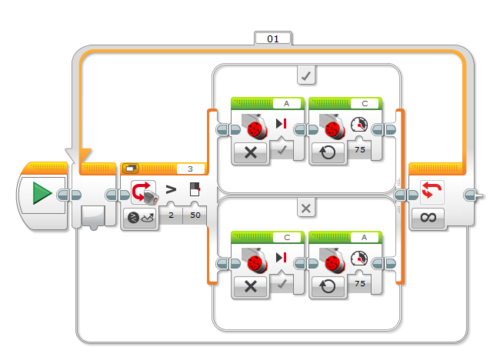 The code for following a line using two light sensors is shown below. 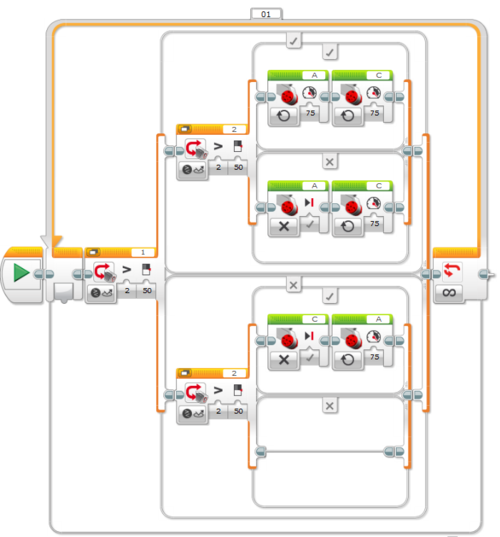 For positioning, the robot should be placed such that the light sensors are in between the line. 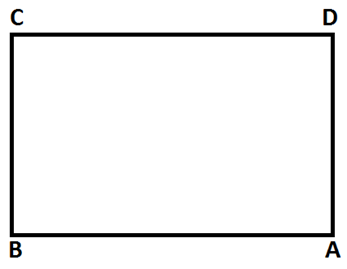 Create a program in which your robot travels from point A to point C in a clockwise manner, then rotates 180 degrees and finally returns to point A. 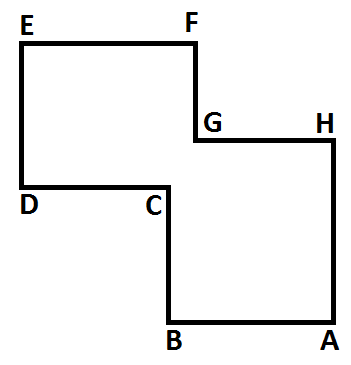 Create a program in which your robot travels from point A to point H in a clockwise manner, rotates 180 degrees, and travels to point C.

A zip file including the following programs needs to be submitted to the EG Website. If you don't know how to make a zip file, read the page How to Compress Your Files in the Instructional Presentations section of this manual.

There is no lab report for this lab.

There is no presentation for this lab.