Reverse engineering software involves reversing a program's machine code to obtain the original source code or determine the file structures the program uses. This is done when source code is lost or is not available. For example, when a project is reactivated after being dormant for years to add new features to a product, the original design documentation may have been lost. Also, when companies are writing a program that must interface with a second company's software, the second company may not have any incentive to cooperate by describing how the data in the files they use are organized, forcing the first company to deduce it on their own. Sometimes, this process is used to improve the performance of a program, to fix a bug, or to find a virus. When the source code is obtained in this way for any of these reasons, it is legal and necessary. Reverse engineering software to copy it constitutes a copy¬right violation and is illegal.[1]

When beginning the process of reverse engineering the robot, identifying the gear trains and the individual gears used in the original design and in the final design is critical to understanding the robot's operation.

There are two types of gear trains: simple and compound. A simple gear train has its gears arranged in a line (see Figure 1). 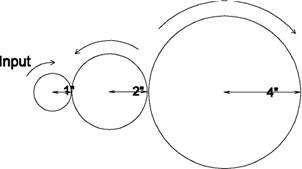 For example, to compute the velocity ratio of the gear trains above, these formulas are used:

Below are images and descriptions of the types of gears that can be implemented in your robot's gear train design.

Figure 4: Change of Center of Gravity because of change of weight of the robot.

Likewise, pieces that are farther out have a greater effect than pieces that are near the middle of the robot. So, if your robot has an arm that lifts and/or reaches, it's center of gravity changes with that movement.

Figure 5: Change of Center of Gravity because of dynamic parts.