The objective of this workshop is to explore the capabilities of a Raspberry Pi, utilize computer vision to detect objects by color, and integrate servo motor control with the color detection output. 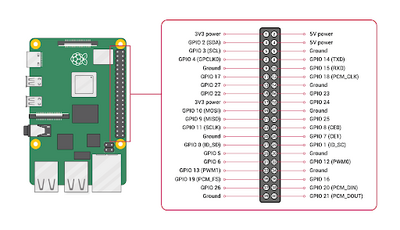 A Raspberry Pi has 28 GPIO pins, two 5V pins, two 3.3V pins, and eight ground pins. The 28 GPIO pins are analogous to Arduino digital/analog I/O pins and allow connections to sensors and additional components, such as an Arduino board.

To further the capabilities of a Raspberry Pi, additional modules, such as a camera module, microcontrollers, and programming libraries, such as the Open Source Computer Vision Library (OpenCV), can be implemented.

Python is a text-based programming language typically used for web development, software development, mathematics, and system scripting. Python is functional across several platforms and has syntax similar to the English language, which minimizes the amount of code needed to perform certain tasks compared to other languages.

Unlike other programming languages, Python does not require a closing mark on lines of code. Lines of code are closed off by continuing onto the next line.

For any loop made (if/elif/else statements, while loops, for loops), the lines following the initial declaration of the loop must be indented (Figure 4). The lack of indentation will cause a syntax error. In Figure 4, the program will determine if 5 is greater than 2, and if true, print “Five is greater than two!”.

A break statement is used to break a loop regardless of the condition (Figure 6).

A for loop is used for iterating over a set sequence. The sequence can be a list, tuple, dictionary, set, or string. In Figure 7, the for loop will print each character in the string random_word with a space in between each character. Similar to the while loop, a for loop can be broken early with a break statement.

Comments within code are typically used to explain the code and make the code more readable and easier to troubleshoot when errors arise. Line comments begin with a # and can only span a single line. Block comments begin and end with a ’’’ and can span multiple lines (Figure 8).

Computer vision is an area of artificial intelligence (AI) that allows computers and systems to measure data from visual inputs and produce outputs based on that data. The OpenCV library is an extensive open source library used for computer vision. OpenCV contains interfaces for multiple programming languages.

In OpenCV, color images are represented as three-dimensional arrays. An image consists of rows of pixels, and each pixel is represented by an array of values representing its color in BGR (Blue, Green, Red) format. The array can be transcribed into the color’s specific hue saturation value (HSV). The HSV model describes colors similar to how the human eye tends to perceive color. This format is more suitable for color detection purposes.

cv2.cvtColor(frame, conversion code) is a method used to convert an image from one color space to another. In the OpenCV Library, there are over 150 different color-space conversion codes. The one used in this lab is cv2.COLOR_BGR2HSV, which converts an image from the default BGR format to the desired HSV format.

cv2.bitwise_and(frame, frame, mask = mask) is a bitwise AND operation that delegates in making the frame only retain what is determined by the set mask. Only pixels in the frame with a corresponding white value in the mask would be preserved. The rightmost panel in Figure 10 shows the output of the command cv2.bitwise_and(nemo, nemo, mask=orange_mask).

cv2.bitwise_or(frame1, frame2) is a bitwise OR operation that delegates in combining multiple frames so that the output retains non-zero pixels from either frame.

cv2.imshow(window name, image) is used to display a given image in a window. The name of the window is given by the first parameter in the command. The window automatically displays in the same size as the image.

Numerical Python (NumPy) is a Python library used primarily for working with arrays. The library also contains functions for mathematical purposes, such as linear algebra, fourier transformation, and matrices. In this lab, the NumPy command used is np.array.

np.array() creates an array object of the class N-dimensional NumPy array, or numpy.ndarray. A list, tuple, or a number can be entered in the parentheses to turn the data type into an array.

The Raspberry Pi Camera Module is a camera that can be used to capture high resolution and high definition images and video. The module’s library features commands to use the camera within code and modify how the camera outputs the frame rate, resolution, and timing of the image or video it is capturing. The camera module’s coding library (picamera) is automatically installed onto a Raspberry Pi once the camera is enabled and the Raspberry Pi is rebooted.

PiCamera() is the function used to call the PiCamera within the code. Typically, PiCamera() is assigned to a variable to make calling the camera throughout the code easier.

PiRGBArray(camera, options) produces a three-dimensional array from a BGR capture. After declaring the camera, the Options parameter can be used to set the size of the image captured.

camera.capture_continuous() captures images continuously until a defined end. For this lab, the format of the output is set to bgr, which means the image data is written to a file in BGR color space format. The output is a file-like object and each image is written to this object sequentially. The output must be cleared in preparation for the next image in the stream.

Before using a Raspberry Pi, the Raspberry Pi must be prepared with a formatted SD card with Raspberry Pi OS and the correct programming library packages installed. For this lab, these steps have been done. A more detailed explanation of the Raspberry Pi Setup can be found in the Appendix.

The following commands are used to program a continuous rotation servo motor once it’s wired to the GPIO pins on the Raspberry Pi:

GPIO.setmode(mode) is used to dictate how the GPIO pins on the Pi are referenced in the program. Following are the two options for GPIO mode:

In this lab, we will be referencing the GPIO pins with the GPIO.BCM method.

GPIO.setup(servoPin, mode) sets the servoPin to either an input or output. The corresponding options for the mode are GPIO.IN and GPIO.OUT

PWM stands for Pulse Width Modulation. Servos use a pulse-width modulated input signal that defines the state of rotation or position of the servo shaft. GPIO.PWM(servoPin, frequency) initializes PWM to a servo pin and a certain constant frequency.

pwm.start(duty cycle) begins servo rotation with a specified duty cycle value, which is a measure of the speed and direction of rotation of the shaft. For the continuous rotation servos used in this lab, the shaft rotates:

GPIO.cleanup() resets the ports and pins to the default state.

Ensure that the Raspberry Pi is connected to a power supply and a monitor. Verify that the camera module and the USB mouse and keyboard are plugged into their corresponding ports on the Raspberry Pi.

Setting up the Raspberry Pi

Before getting started with this procedure, ensure that an SD card with Raspberry Pi OS is inserted into the designated slot on the Raspberry Pi.

Raspberry Pi will boot up and the monitor will display the desktop. This concludes the Pi setup.

Setting up the Camera Module

The following steps outline the procedure for connecting and enabling the camera module.

The camera should take a still picture and save it as testpic.jpg on the Raspberry Pi. A preview should be visible on the screen for a few seconds. If this command returns any errors, please notify a lab TA. 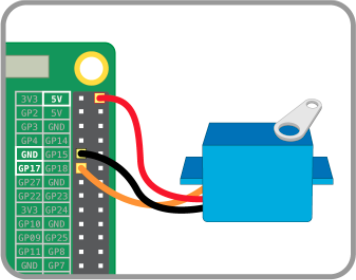 In this part, a Python script that isolates red and green colors from a live video captured by the camera module will be developed and this output will be used to create a prototype of a traffic light detection system.

This concludes the procedure for this workshop.

This section outlines the procedure for installing an operating system on the Raspberry Pi using the Raspberry Pi Imager. A formatted SD card and a computer with an SD card reader are required to follow this procedure.

This section outlines the procedure for installing the Python packages used in this lab.