Center of Gravity is the place in a system or body (such as a robot) where the weight is evenly distributed and all sides are in balance. An example of center of gravity is the middle of a seesaw when it is balanced. You can think of a robot’s center of gravity as the “center position” of all the weight on the robot. Because Center of Gravity uses both weight and position, heavier objects have a greater effect than lighter ones in determining where the center of gravity is. For example, if your robot can collect, hold, and/or manipulate objects, those objects change the center of gravity as they are being manipulated because they add weight. Likewise, pieces that are farther out have a greater effect than pieces that are near the middle of the robot. So, if your robot has an arm that lifts and/or reaches, its center of gravity changes with that movement.

A sensor is a device that measures a specific value and is used as an input. Different properties can be measured by the EV3 sensors, such as light intensity, angle, or distance. The three sensors used in this lab are the light sensor, gyro sensor, and ultrasonic sensor.

The light sensor or color sensor (Figure 2) can measure reflected light intensity, color, and ambient light, and is useful when the robot has the option to follow a line or use differences in color to perform different actions, such as stopping when detecting a different color. If measuring color, the sensor outputs a value (0-7) that corresponds to a specific color. Measuring reflected light outputs a value (0-100) depending on the intensity of the light that is reflected. The ambient light works the same way as the reflected light, except it measures only the surrounding light. The light sensor, as well as all other sensors, can be found in the yellow category the Mindstorms software. The light sensor should be placed so that it is 2 cm, at max, away from whatever it trying to record.

The type of value the sensor can measure can be changed by clicking the small box on the bottom left of the block (Figure 3).

The gyro sensor can measure the degrees it turns or the rate at which it is turning. For example, if the robot is set to turn 90º using the gyro, the robot will keep trying to turn until 90º is reached, regardless of any bumps in its way (Figure 4). The gyro sensor should be placed parallel to the plane of the EV3 Brick.

The ultrasonic sensor measures the distance between the robot and the closest object to it. It can measure distance in both centimeters and inches; the recommended range is 1 cm to 250 cm (Figure 5).

A switch is an “if-else” statement: if the initial condition is true, the top action will occur, if false, the bottom action will occur. This block is used when the robot has to perform different actions depending on the input from the sensors (Figure 6). 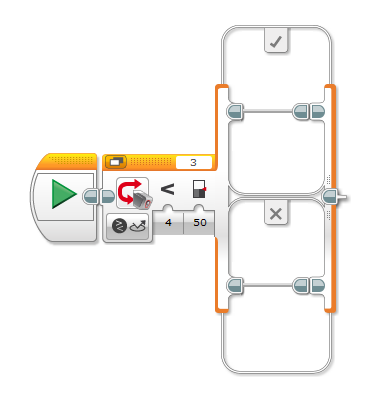 A switch will only run the code once, so if repeated action is desired, a loop must be used to repeat the switch’s statement. A loop continuously runs the code until the end statement occurs. The end statement can be determined with a sensor or hard-coded to a specific duration or rotations. Figure 7 shows an infinite loop. 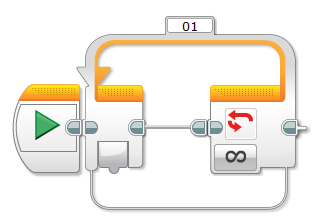 The mini-course (Figure 8) has a designated Section 1 to complete the eight trials of the lab: one flat straight section of four tiles and a right turn with a wall at the end. The competitive trial will utilize the entire course. In Figure 8, Section 1 is marked in red. 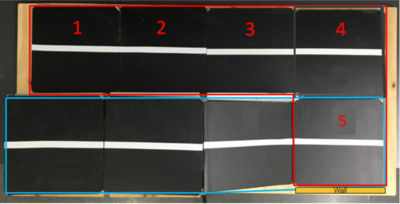